Brocade: A brocade looks similar to a willow tree, but is usually much brighter than the “willow” effect. It’s most often seen in gold, but can be other colors as well. Brocades span straight out and may drop slightly down before burning out.

Chrysanthemum: This break gets its name from the chrysanthemum flower it looks similar to. It’s also commonly called a “crackling flower” effect. You’ll see it explode from the shell, often with color, and then crackles go off roughly a second later. If you love the Chrysanthemum effect, check out our show series item “Crackling Flower“!

Palm: The Palm effect gets its name from the palm tree it looks just like. You’ll see a handful of tendrils break out of the shell and fall slightly downward before burning out. The palm effect can be in any color and have other effects in it such as strobes or crackles.

Peony: The most common break in consumer fireworks. The peony is one big ball of bright color.

Willow: The willow effect looks like a willow tree. However, in consumer fireworks it is very difficult (if not impossible) to get a TRUE willow due to the amount of powder the break needs. If you’ve been to professional public displays then you’ve seen a true willow that falls waaaaay down from the sky and almost touches the ground. True willows are absolutely breathtaking! The gif below shows what a consumer firework willow looks like. The image shows a professional, true willow. 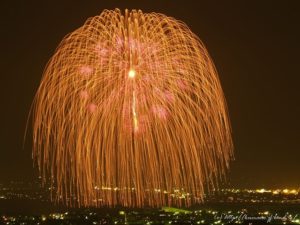 These are some of the more common effects you see in both consumer and professional displays. Next week we’ll talk about some of the more unique breaks such as fish, horse tails, and crossettes! Make sure you’ve subscribed to our blog so you don’t miss out on more Pro Talks!