Last week we talked about the different types of cakes you see in consumer fireworks. Today, we’re going to be talking about artillery shells and what makes them different. We talked about how with a cake, you only have to light one fuse and then multiple shots go up. You might be wondering why anyone would want to use artillery shells if cakes are so much easier. Well, for starters, artillery shells can be much bigger displays!

An artillery shell, also called a “mortar” or a “re-loadable”, is a shell that is dropped into a launch tube and lit one at a time.

The main thing to understand about an artillery shell, is that they have a powder limit of 60 grams. If a shell contains more than 60 grams of powder, it will not pass inspection and won’t be shipped into the united states. This is a FEDERAL regulation. Every year we have someone come in telling us how they go to Tennessee to get “the big stuff”, but here in Indiana and Kentucky our states follow the federal regulations. It would be against federal law if another state such as Tennessee was selling something bigger. Now that we understand that, let’s talk about the different types of artillery shells you see in consumer fireworks.

Ball Shell: A ball shell is a small round shell usually containing approximately 8 to 10 grams of powder. These are very popular as they are often cheap to buy. Many, if not most, backyard pyros started off buying ball shells. 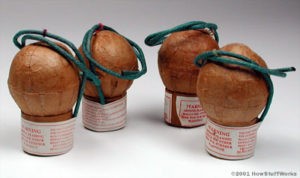 Double Break Shell: A double break shell looks a lot like a peanut. It’s two ball shells that are attached together with a short time fuse between the two of them. When a double break shell is fired off, it will have two breaks (or explosions) in the sky. Remember, you can only have up to 60 grams of powder in a shell, which means each break can only hold 30 grams of powder at most. 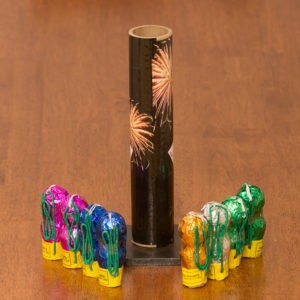 Mine to Break Shell: A mine to break shell is similar to a double break in that there will be two explosions. The first one will be a mine effect as the shell is launched out of the tube. The second will be a break up in the sky. If you don’t remember what the mine effect is, see our previous post: Pro Talk: Breaks, Comets, Mines, and More.

Triple Break Shell: A triple break shell is just as it sounds. It looks like three ball shells all stacked onto each other and explodes three times up in the air one after the other. Again, since an artillery shell can only have 60 grams of powder, a triple break will only have at most 20 grams of powder per break. 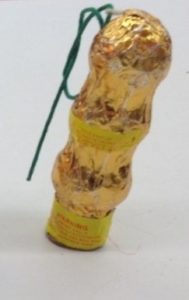 Canister Shell: A canister shell is the biggest type of shell you can buy in consumer fireworks. Cylindrical in shape, a canister shell can hold the full, maximum load, of 60 grams of powder. Now, this doesn’t mean that all canister shells will have 60 grams. Very few do. In fact, we were the first company nation wide to have a true 60 gram shell. We’ll tell you all about how we did that another day. 🙂